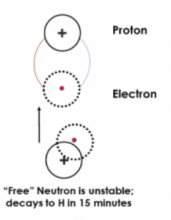 The Standard Model of the Atom states the nucleus consists of protons and neutrons. The neutron is thought to be a particle of it's own. However if a neutron is removed from the 'safety' of the nucleus within 15 minutes it will spontaneously decay into a proton, electron and an anti-neutrino. Therefore a neutron by itself is an inherently unstable configuration. A neutron must be part of a nucleus in order to stay together.

Protons and neutrons have nearly the same mass whereas electrons are much less massive. The relative masses are:

SAM postulates that the neutron does not exist as a fundamental particle but is a proton and electron held together electrostatically. This means the nucleus is composed of protons and electrons, not protons and neutrons. The nuclear electrons bind the protons together and hold them rigidly in a densely packed structure.

On the left we see the deuterium nucleus or 2H. It consists of 2 protons and one electron. This structure is stable and can exist on it's own. It is the basic building block of the larger elements. However it is relatively rare because it is consumed in the building process.

On the right is the nucleus for helium-3, a stable but very rare isotope of helium. On earth there is a million times more helium-4 than helium-3. The Helium-3 nucleus has three protons and one inner electron. The electron is thought to settle into a resting position in the middle of the protons.

To the left is Helium-4 with 2 inner electrons. You can think of it as 2 deuterium pairs, each pair being held together with it's own electron.

Calculations made by Carl Johnson show that since an electron is much smaller in size than a proton it only needs to be present 25% of the time to hold two protons together. Therefore it is quite feasible that a single electron can hold 3 protons together in the nucleus.

Where the electrons are within the nucleus and whether they are static or moving is little understood at this point and will require future research.

It is known if a neutron is removed from the safety of the nucleus of an atom, it will decay into a proton, electron and electron anti-neutrino within 15 minutes. This process is called beta decay.  The conventional equation to describe beta decay is:

In SAM we rewrite the above equation by adding a neutrino to each side and get the following equation:

SAM postulates the neutrino is not a particle but is a form of energy that activates the beta decay. This decay does not occur randomly through some internal process, but is activated by an input of external energy. We conclude this activation energy comes from the environment, not from within the atom. This idea was put forth by Nikola Tesla when he claimed atoms had no intrinsic energy but that this energy comes from the Sun. This is not so different from conventional belief that we are bathed in a sea of neutrinos which comes from the Sun.

A paper written by Carl Johnson puts forth there is no need for the neutrino. The reason the neutrino was invented was to balance spin in calculating neutron decay. Johnson shows that this was a miscalculation because Enrico Fermi treated spin as a scalar value instead of a vector. If we use vectors for spin the calculation balances nicely without adding in a neutrino.

On the left is 3H or tritium, a semi-stable isotope of hydrogen. Conventional belief is that the nucleus has one 'proton' and two 'neutrons'. SAM redefines the nucleus to consist of three protons and two inner electrons. Both theories agree there is one outer electron in orbit.

When tritium decays into 3He the structure of the nucleus changes from three nucleons in a line into 3 nucleons in the shape of a triangle. This triangular configuration does not have room for 2 inner electrons, therefore one of the inner electrons is booted into an outer orbit.  This leaves us with helium-3 which according to conventional theory is a nucleus with two 'protons', and one 'neutron'. SAM redefines the nucleus to be 3 protons and 1 remaining inner electron. Because one electron was booted from the nucleus there are now 2 electrons orbiting about the nucleus.

Here is a schematic sketch…

Here is a schematic sketch that depicts two Deuterium with a bond between them to illustrate what the inner and outer electron location is. The nucleus is build up from these smallest building blocks. The connection between the two D is shown as an outer electron connected to both the atom's nucleus.

nb. the outer electron is in reality at a distance of 10.000 times or so the diameter of the nucleus. 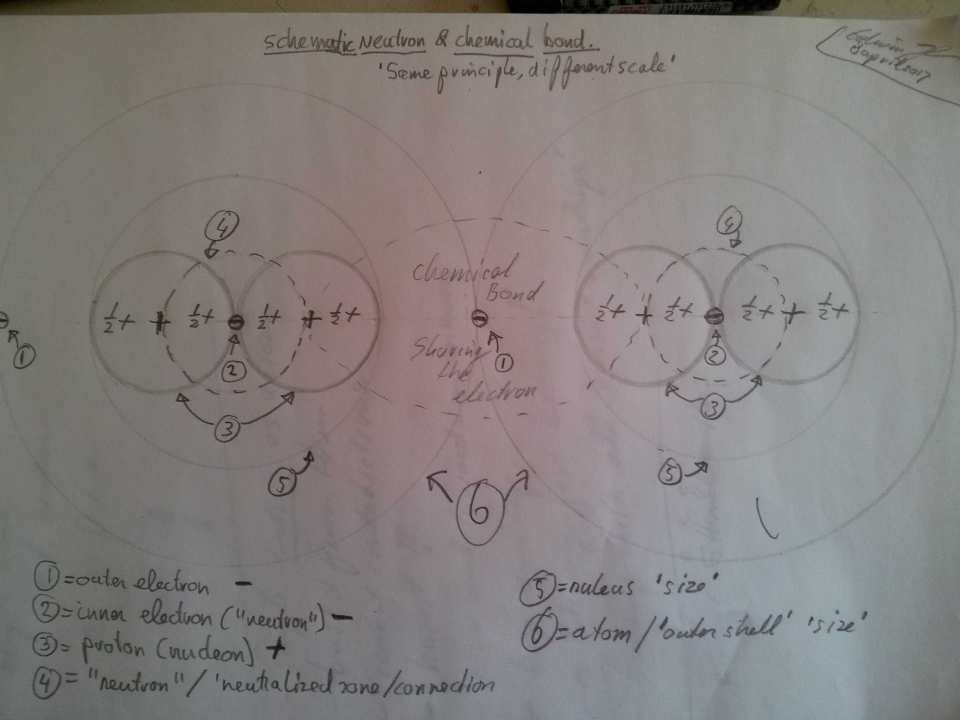 Dear Edo, I agree with your…

Dear Edo, I agree with your emphasizing the electron's role being inseparable from the protons in a nucleus. I want to post an image of neon here, using a cube at its center and the six faces covered by protons and neutrons. How can I post an image? Here is a picture of uranium with the pyramidal cube structure...
http://ferronuclear.blogspot.com/p/uranium.html
The electron uses 3 dimensions out of the 4 dimensions that the proton has. See the images of the electron-proton pairing to support SAM directly. Good work Edo.
https://impuremath.wordpress.com/contraspline/

Hi, I have another idea. it…

I have another idea. it is same as yours that neutron is proton + electron.but there is difference from you.

For example, triple deuterium and helium 3 are as follows.

3 Deuterium has three electrons in the nucleus.  Since each electron is charged to the proton bond, the outgoing charge is 2/3. One of the electrons is off, and beta collapses to helium 3.

Helium 3 has 3 protons connected in series.  Charges going out are 1/2 each.

Why does 3 deuterium collapse in beta? 3 Deuterium is easy to attract electrons because there are three protons. When one electron attaches to 3 nucleus of deuterium, electrons are dragged from the adjacent proton which sticks. Drawn by the proton's plus, the electron moves on the surface of the proton and flips out the electrons that have attached the protons together.

This phenomenon is the same as the collapse of neutrons.

there is more details on my blog. sorry, my blog is in Japanese. please use translation of google.

I like to think about the electrons as rubber bands not as "simple" points of charged matter.

Hello ja7tdo, I have reviewed your comments, emails and blog. There is merit
in your focus on the neutron as an electron merged with a proton and stuff.
That is better than quark mythology. Please continue to draw sketches and
give geometric reasoning for the details of the new neutron. I call the subject

It uses the theory that a proton has 4 dimensions of electromagnetism but
the electron only has 3 of those 4 dimensions. Two space and one timelike counterflow.
Here are my hand drawn sketches linked.
Neutron powers
http://pyramidalcube.blogspot.com/p/neutron-powers.html

4 dimensions + 4 more for gravity and expansion unified with electromagnetism:
https://impuremath.wordpress.com/contraspline/

I am grateful for a very meaningful opinion. I also read your site. It is a bit difficult for me, but I think I will understand it over time.

As an extension of the SAM…

As an extension of the SAM model, I offer an explanation of the proton also as a structured entity, and it is as a closed, regular, non-nucleated icosahedron of electrons, the 12 around none.
With a model of the Sun as an opto-elecro-magnetic machine, it has at its core the 'Light of Creation', a source of the very highest energy gamma rays, those gamma rays being created at the pinch point of inter-galactic flux tubes. It is a continuous vacuum arc that produces those gamma rays.
With the gamma-gamma physics model, then we have only positive and negative (or yin and yang) electrons being created, and these are the primary building blocks of the physical universe. The forces are not opposites but complementary, we can really do without the concept of positive and negative.
As with the big bang model, these complementary electrons should be produced in equal amounts, but where are the missing 'positive' electrons?
I suggest they are at the centre of the non-nucleated icosahedron, trapped within a cage of electrons, a cage that is, with the energy levels available to us, indestructible. It takes energy of at least 10^21 eV, and vibration, to allow the proton to be created, and probably much more to un-create them.
I'll leave it at that for now, but to go further involves looking then into the Qabala.

Hi Just a question: What…

Hi
Just a question:
What about the beta+ decay?

The answer is still only written in Japanese.

This sounds like neutrino induced phase switch. This also may mean that the electron is more complicated as we thought. I mean the charge is manifestation of certain quantum resonances.

I believe that pions, kaons, muons, etc. are in a state where electrons gain energy and change. Kaons have too strong an energy and can only couple protons for a moment.

This mechanism is not yet known.

A neutrino is a pulse of charge, or electromagnetic wave, generated when a proton and an electron combine or leave. Neutrinos transfer protons to the medium, but pass some charge to the protons. The atoms seem to be able to maintain their structure because the neutrinos are supplying charge to the nuclei.

I haven't written these in English yet.

I disagree, not with the part that certain neutrinos doesn't create transitory aggregates inside the nucleus to facilitate certain processes, I disagree with the "passing some charge" part, because if it was true, then the atom would fall apart due instability caused by charge imbalances.
Another problem with this theory is that doesn't answer the origin of neutrino's charge. Meaning more likely the polarity of the proton was copied on the electron by the neutrino.
BTW if you look at the Mendeleev table from 1906 you can see elements as Newtonium an Coronium in the table:
https://www.bebamur.com/uploads/2/6/9/1/26914112/3083264_orig.jpg
http://rusphysics.ru/picture/img/mendeleev_big.jpg

> then the atom would fall apart due instability caused by charge imbalances.

yes, that is decay. please read my articles.

I meant that the imbalance between the nucleus and the electron shell, because it would either generate anions first or an unaccounted electron.

> I meant that the imbalance between the nucleus and the electron shell, because it would either generate anions first or an unaccounted electron.

there is slightly misunderstanding about your question. But I guess all particles are expected to have different energies.

The structured atomic model is a very good idea. If we start from Maxwell, we can understand the electron as a vortex curl E and the proton with its mass as curl B.
Without curl E, the neutron would have no magnetic moment.
The neutron then consists of two interlaced vertebrae. a permanent magnet then consists of two curl B and one curl E. This also describes a 2H core. A 3He core then consists of 3 curl B and one curl E. These three basic building blocks allow all isotopes, the stable ones and the radioactive ones to be assembled. The SAM model would be reduced by half of the elements because a permanent magnet contains two protons and one electron. The elements with an even proton number are always stable. A stable element with an odd number of protons would then always have an enclosed 3He nucleus. An atom with its atomic shell as another vortex could be thought of as a transformer, which it really is.