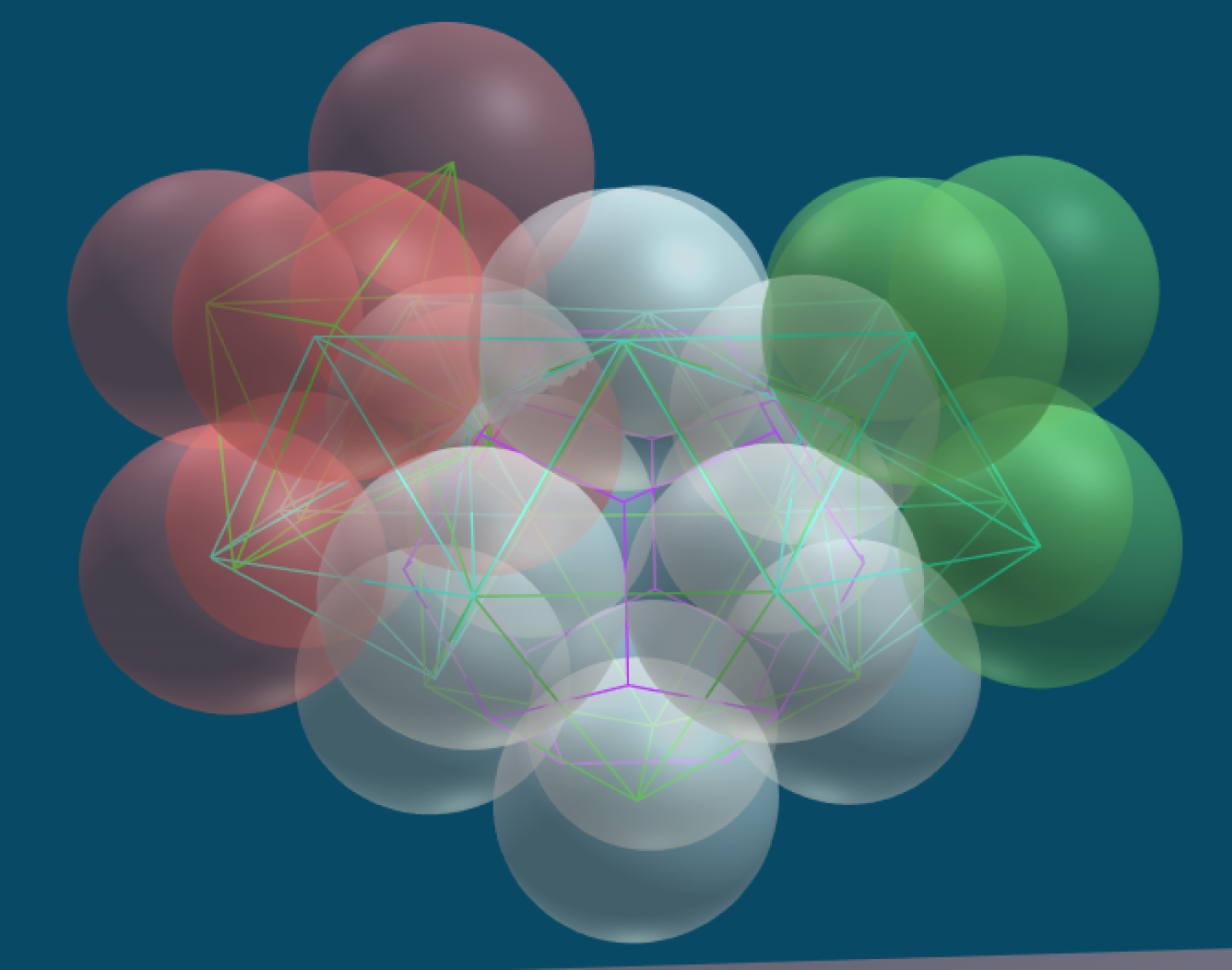 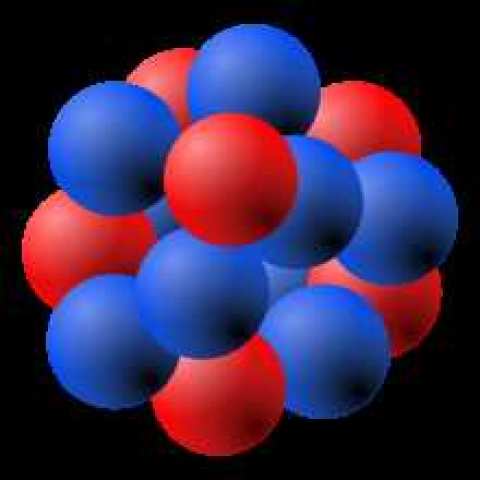 Chaotic Blob Model of the Atom

A model of the atomic nucleus showing it as a compact bundle of the two types of nucleons: protons (red) and neutrons (blue). In this diagram, protons and neutrons look like little balls stuck together, but an actual nucleus (as understood by modern nuclear physics) cannot be explained like this, but only by using quantum mechanics. In a nucleus which occupies a certain energy level (for example, the ground state), each nucleon can be said to occupy a range of locations.

Atoms are the basic building blocks of all matter - they define the elements and their chemical properties. All atoms of the same element are alike and have the same mass. Examples of elements are Hydrogen, Sodium, Oxygen, Chlorine and Gold. Elements are combined to make chemical compounds. For example an equal number of atoms of the elements Sodium and Chlorine are combined to make the molecule Sodium Chloride, which we call table salt.

The nucleus of the atom is thought to be made up of protons and neutrons. The Strong Nuclear Force holds the positive and neutral nucleons together otherwise the nucleus would fly apart.

If a neutron is removed from the nucleus, it will spontaneously decay into a proton and electron within 15 minutes.  The Weak Nuclear Force holds the neutron together.

The electrons orbit about the nucleus and are held to the nucleus with the Electrostatic Force.

Does the Nucleus Have Structure?

Current scientific theories make little attempt to describe a structure for the nucleus. The Wikipedia image to the right shows a blob of neutrons and protons in no particular order or structure.  They are jumbled into a spherical shape but no one really has an idea what it looks like.

Scientists really aren't even looking for a structure.  Quantum Mechanics (QM) states that it is impossible to show a true shape to the nucleus and instead depends on mathematics to describe the atom.  The nucleons are thought to exist in multiple positions and can move about the nucleus. QM uses atom smashers to break apart the protons, neutrons and electrons and has found hundreds of smaller particles, but it has not answered some of the basic questions of chemistry. 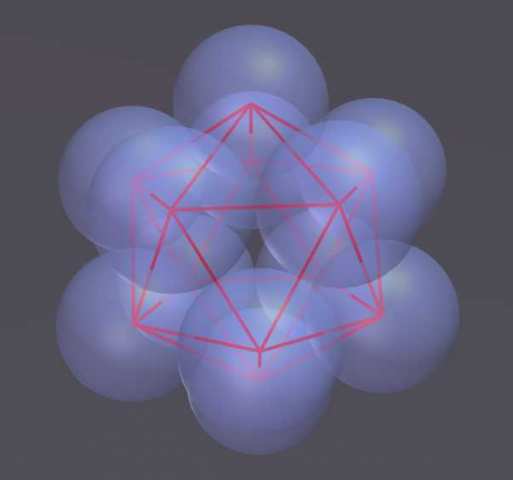 Carbon nucleus - Icosahedron made from 12 spheres

The "Structured Atom Model" (SAM) theory postulates that there is a very predictable and fixed structure to the nucleus.  This structure is based on the platonic solids and the concept of dense packing.  The primary building block consists of twelve nucleons in the shape of an icosahedron.  In an icosahedron the nucleons are densely packed, which means they are nestled together as tightly as possible and there is no room for movement.  In a stable element, the structure of the nucleus does not change: the nucleons do not move about.  Any change results in a new element or isotope.

SAM and the Periodic Table

The periodic table is a tabular arrangement of the 118 known elements.  The layout of the table groups together elements of a similar nature.  In general the metals are on the left and center of the table and the non-metals are on the right.  Elements from the same column have similar properties.

A very interesting (and addicting) periodic table to explore is the Dynamic Periodic Table.  I've spent many hours playing with it.  It visually shows the properties of the elements in relation to each other.  You can compare melting points, conductivity, hardness, density, etc.  This table does a great job of demonstrating the vast amount of information scientists have accumulated about the elements over the last two hundred years.

It stands to reason that if the nucleus has a structure, then that structure is responsible for the organization of the periodic table.

Science is the art of making observations and from that devising a theory to explain the observations. 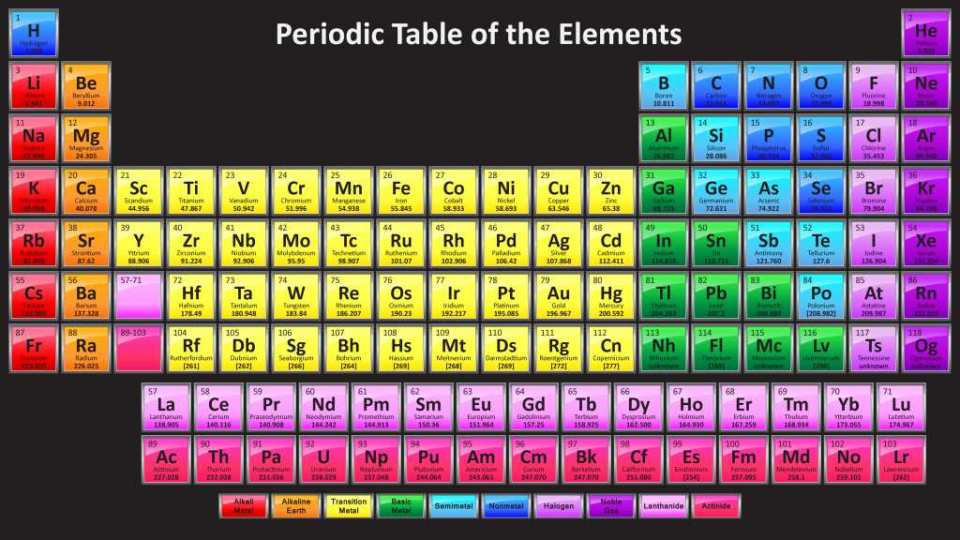 This process of trying different shapes went on for 10 years.  He tried cylinders, nested spheres, cubes.  Sometimes he became frustrated with the whole project and put it aside for a while.   Then he would have a new insight, find a structure that explained the next step, and he started working on it again.

Eventually Edo became convinced that the nucleus is built from densely packed nucleons that start with a tetrahedron. This is helium with 4 nucleons.  The elements grow by adding additional nucleons which form a tetrahedron with pairs of nucleons already in the nucleus. When the nucleus has 12 protons it makes an icosahedron - this is the 6th element carbon.  Larger atoms are composed of multiple icosahedrons that attach to each other in a branching tree-like pattern.  The resulting structures explain many phenomena about elements and chemistry that have eluded us in the past.

One aspect of the periodic table is the repeating pattern of 8, or what in 1865 John Newlands called the Law of Octaves.  As you go through the table element by element in increasing weight, you will discover that valence follows a pattern of 0, 1, 2, 3, 4/-4, -3, -2, -1; then the pattern repeats. This pattern also occurs in the SAM model as you build larger atoms.

I've been asked many times what experiments need to be done to prove SAM.  My answer is simple - the experiments have already been done.

At the 1933 Solvay conference 28 of the world's premiere physicists got together to decide if the nucleus of the atom consisted of protons and electrons, or protons and neutrons.  There were heated arguments and the decision was not unanimous.  Nevertheless the vote was in and the proton/neutron model won.  The proton/electron model was soon relegated to history.  Could this decision have been a major blunder?

Scientists know that a neutron cannot exist for long on its own. Within 15 minutes of being removed from the nucleus, a neutron will decay into a proton, an electron and an anti-neutrino. This process is known as Beta decay.

The protons ensure that the structure is immovable and stable. The electrons are the glue that hold the protons together and are thought to be in a (in principle) static position. Since electrons are much smaller than protons, they do not have to be present between 2 protons very long to hold them together. SAM redefines a neutron as a nuclear electron being shared by two or more protons.

The nucleus is made up of protons and shared electrons.

Having just one type of particle for the structure of the nucleus, greatly simplifies things. You don't have to concern yourself with where the 'protons' and 'neutrons' go. For this reason the proton/neutron model has made it impossible for us to discover a structure that matches observation.

A typo in this paragraph,…

Eventually Edo became convinced that the nucleus is built from densely packed nucleons that start with a tetrahedron. This is helium with 4 nucleons. The elements grow by adding additional nucleons which form a tetrahedron with pairs of nucleons already in the nucleus. When the nucleus has 12 protons it makes an icosahedron - this is the 6th element carbon. Larger atoms are composed of multiple icosahedrons that attach to each other in a branching tree-like pattern. The resulting structures explain many phenomena about elements and chemistry that have eluded is in the past.

Thank you for pointing this…

Thank you for pointing this out. Fixed