Quantum mechanics is wrong from beginning Yet another SAM

In 1913, quantum mechanics began with Bohr's atomic model.  There was a defect which can not be explained by classical physics in this atomic model. Niels Bohr thought about the reasons for electrons to travel around the nucleus without losing energy. Since negative electrons are attracted to the plus nucleus, they should have fallen into the nucleus. The De Broglie wave and the quantization were introduced there.

As a result of introducing a de Broglie wave and a wave function, electrons became clouds unnoticed. Uncertainty principle, Schrödinger's cat is the cause of being born. Let's think about it more.

The nucleus has a structure in which protons and protons are bonded by electrons. The point that neutrons are made up of protons and electrons is the same as SAM. However, SAM does not seem to acknowledge the influence of the electron coulomb power inside the nucleus on the outside. 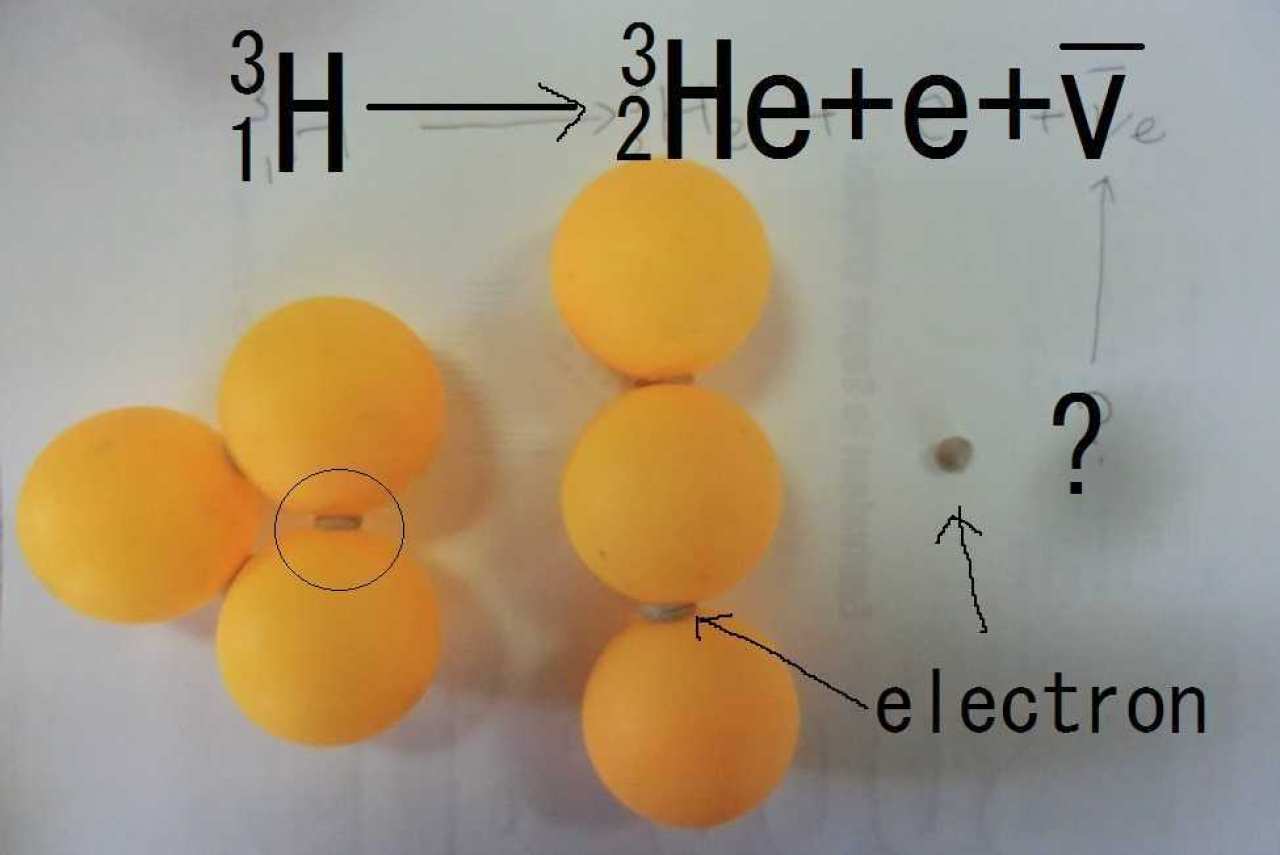 This is a diagram where triple deuterium beta decay into helium 3. I think that the difference between SAM and SEAM is well understood. Interestingly, SEAM can explain well about the neutrinos associated with the beta decay.

Continue to next article

ja7tdo, great post, it's great to see new ideas posted. Our goal with this site is to get a discussion going about these concepts, there is so much to learn

I agree with you that the inner electrons are static. SAM states an atom must be in a static state in order for it to be stable. However the planetary model for the outer electrons seems unlikely, it appears those electrons are also static and are held in place as you stated by the combined attraction and repulsion of the protons and electrons in the nucleus.

SAM was initially created looking at how the protons are structured. The proton structure alone is why we claim SAM explains many aspects of the elements such as valence, nuclear spin, isotopes, stability, etc.

It's only been the last couple of months that we started looking seriously at the inner electrons. I just recently added to the Atom Viewer the ability to show where the electrons might be located. We've just started studying this and the results are exciting. We're not ready to publish any of it yet because there is still a lot to learn. However we've found strong evidence the placement of the inner electrons is instrumental in chemistry - which is how it should be.

I think we really need to step back and look again at what the proton and electron are. SAM postulates there is only one force, the electrostatic force. SAM also states there are only two 'particles', the proton and electron. This is what all matter is made of. This is a huge simplification over the 200+ sub-atomic particles Quantum Mechanics theorizes. (SAM doesn't attempt to describe gravity but it is thought to be an electrical effect.)

We think of electrons and protons as particles, and in SAM the proton is a solid particle. However the electron is mysterious, scientists usually think of it as a wave. I've pictured it in the Atom Viewer as a point with a field around it, but we don't really know what it is.

The protons and electrons are duals of each other, they are opposites. So if the proton is a solid, hard, positive particle, then the electron is a negative formless field, or wave - everything a proton is not. I think of the electron as a sticky, gooey, syrup, it's not a very scientific description but it does describe how it behaves.

I'd love to get a discussion going about the proton and electron and brainstorm about different possibilities. Allow anyone to throw out ideas and see where it leads.

At first, my interest was in the earthquake. While thinking about the earthquake, I reached the rotation of the Earth and noticed the essence of gravity. There is no useless thing in nature. All phenomena, things are related. The atomic structure is also the same. The huge amount of neutrinos falling on the ground is related to something. I would like to think with you all.

Palaeontology, Psychology and Astronomy are composite sciences, and the testing ground for the more elementary. All three bespeak serious flaws in our bottom line, the collective hypotheses that form a foundation for the latter. A composite requires a scenario of evolution to describe that which exists in the macroscopic, beyond all generalisations. Largely, glaring inconsistencies in each is ignored, with vested interests and the questing for notoriety apparently looming large as causes. The flip side of that coin is the disregard for Truth (as consistency - the only definition) and its consequences. Were there no escape of consequences in death, as the ancients believed, such behaviour across the economic food chain would appear pure folly to all. Truth, justice and liberty are Einstein's keywords thanks to an ancestry he thanked God for while trying to see through the same eyes. It leads to Hermetic thinking - the Philosopher's stone - all things are one thing, and as all things are created by the One Word of One Being, so were all things created from One Thing by adaptation - the alpha and the Omega - Spirit - Consciousness - electric field, electro-magnetic-gravitational energy which can materialise into oppositely charged particles, which can form stars - but the photon also annihilates its opposite - a neutrino - E = mc^2 is satisfied. Yet all this creation is electric fields, but we cannot deny that it is made manifest by senses whose source is the One Thing - as per Einstein - and relativity declares that creation is NOT independent of the observer. Two theories - no matter how different they may sound - are equivalent unless they can be distinguished by experimental evidence. If these cannot - even miracles, astrology, fate, karma and reincarnation (within the same order of life) are more likely than your own existence in this moment in time since God said, "Let there be light". Examine the cause of magnetic fields due to relative motion of charges, yielding the constant the proportionality constant c^2 relating permeability and permittivity. Just so, with relativistic electrons maintaining the balance of forces in stable nuclei, we have extreme acceleration dealt with by general relativity, and causing the force of gravity in like fashion. Now, antimatter hydrogen has charges reversed. We see the possibility of a dipole accounting for the potential energy of matter/antimatter as mc^2. So, while electric field disturbances propagate at c, electric field effects determine meters and seconds in the observer’s own inertial frame. Thus the energies must be light and dark (relative to the observer type, light or dark matter), and experience forces in opposite directions in a gravitational field. It is not unlikely that a black hole converts photons and repels neutrinos recycling matter and vice versa. We now have a steady state theory, and a universal status quo reached a googolplex lives of the Sun ago that began as Thought in the archetypal concept called The Word. Not a pleasant thought for the unrighteous soul that its covenant with death may be annulled, should this be True Science. At this point it consists of some postulates implicit and otherwise, and a great deal of revision and mathematical wizardry. For an entire cosmology, my present level of hypothesising seems to answer more questions than it creates. I have intuitively believed that matter and antimatter galaxies repel one another since learning that antihydrogen was a possibility, one inconsistent with Hubble’s cosmology. Einstein was denied the knowledge of antimatter – but this has been available since 1956 with the discovery of the antiproton, without which the positron spawned some ludicrous theories with tenuous evidence, much like those which Einstein’s quantum of light has encouraged.