From the site of Mario Buildreps, let us introduce the hypothesis that the angle of the ancient ruins points to the rotation axis of the past Earth.

It is well known that the Great Pyramid of Giza points its four sides exactly to the east, west, north, and south of the earth. Many ancient ruins, temples and structures make sense in the direction of the building. Direction is important because every civilization has an important meaning. 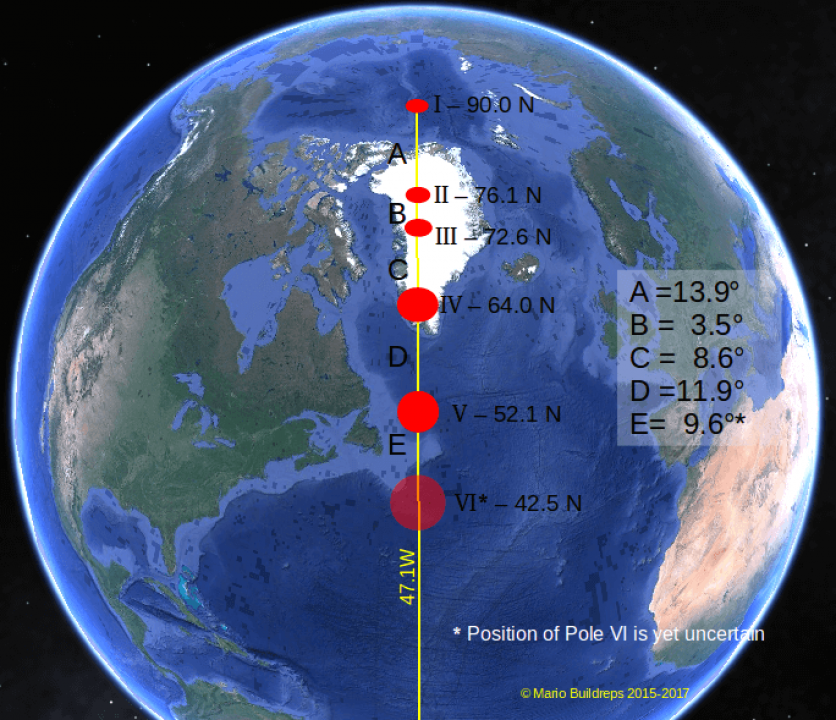 The red point above Greenland is the current North Pole. There are 5 points down on Greenland. It is thought that this red point is the North Pole that has moved with each era. The oldest north pole is estimated to be 750,000 years ago.

It is interesting to note that the spacing of the five displaced North Poles is a perfect match for the past ice age period. 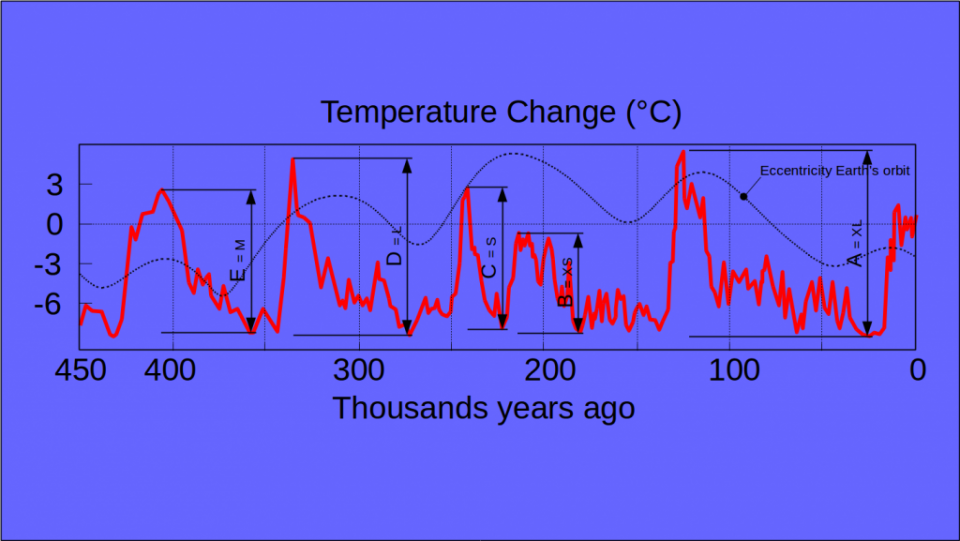 When the period in which the temperature rises sharply is applied to the interval of each point, the proportions are in excellent agreement.

Electric Earth Science think that the movement of this rotation axis is closely related to the expansion of the earth. The following image is given as proof. It compares the five rotation axes of Mario Buildreps and the topography near the Mariana Trench.

Electric Earth Science have claimed that the magma belt lies beneath the Pacific volcanic belt and is the core of the Faraday motor. Magma is pulled to the east by Lorentz force. The arched topography of the Mariana Trench is a trace of magma tension. The seabed topography that appears in this image indicates that the magma belt has moved over the past five times. The offset of the arc-like terrain also indicates that the pulling force to the east is slightly offset.

Near the Mariana Trench

The movement of the rotation axis discovered by Mario Buildreps means that expansion of the earth was accelerated during the ice age. Traces of the expansion remain on the terrain around the Mariana Trench.

He also pointed out that global expansion may occur rapidly during the ice age. As the earth expands, the area of the sea expands. The sea level drops because there is not enough sea water. 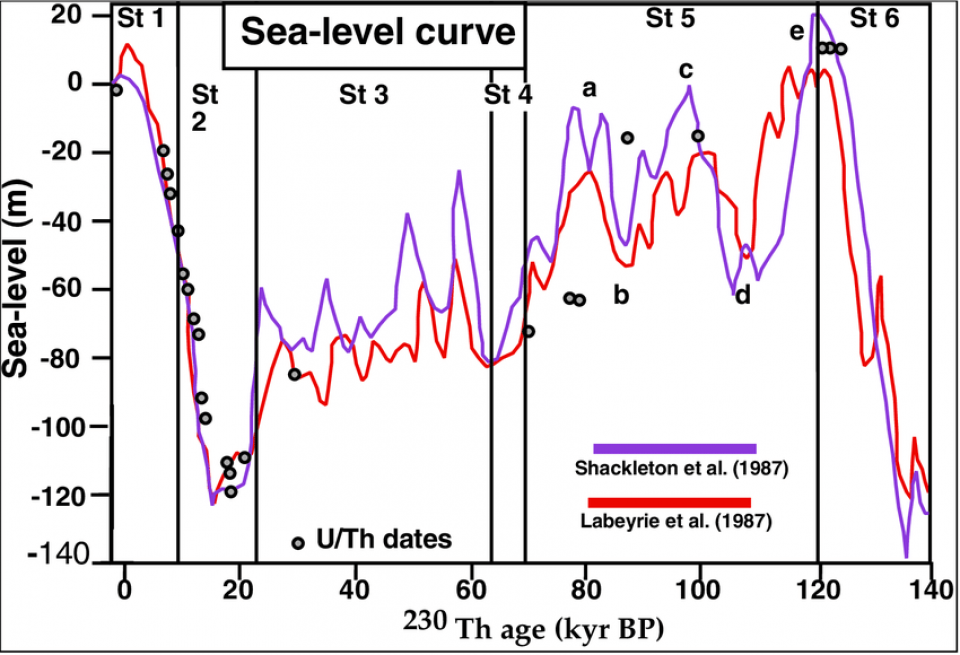 How is water supplied from inside the earth? One of the possibilities is submarine volcano and hydrothermal deposit. Hot water of high temperature and high pressure is boiling in the deep sea of ​​the ocean where the plate is supposed to be born. It is believed that the hydrothermal fluid containing a large amount of heavy metals has risen again due to the heating of seawater that has infiltrated the crust. However, if water is formed by phase transition of olivine in the mantle, it is more reasonable to think that the water in the hydrothermal deposit is coming from the mantle.

The river starts in the mountains and pours into the sea. The water of the river is said to have been collected by rain on land. But no one has confirmed the balance of the water. If you dig a well, the water will grow more and more. The temperature is not so high at around 100m, but high temperature water will come out when digging at 1000m. Isn't hot water the same origin as hydrothermal deposits?

It is believed that the rain comes from the water that has evaporated from the surface of the sea and the surface again and falls. Rain clouds are created by the generation of core electrons. When high energy cosmic rays rush into the atmosphere, they generate a large amount of muons and neutrinos. When one proton rushes at super light speed, several billion muons and neutrinos are generated. Muons decay into electrons (-+). Also, electrons from the mantle are moving from the surface to the ionosphere. It is an atmospheric current.

Remember that water is H2O, hydrogen combined with oxygen. Hydrogen is bound to the oxygen atom by two protons, which are two electrons.

At this rate, nitrogen should be 66% and oxygen should be 33%, but 78% and 20%. Oxygen is going somewhere. If oxygen meets hydrogen and electrons, it becomes water. If a large amount of electrons are emitted from the ground surface and the potential difference increases, it attracts the positive ionosphere. The ionosphere contains a large amount of protons, ie hydrogen atoms. When protons flow into the atmosphere and encounter electrons from the surface, they associate with the surrounding oxygen and become water. It's a rain cloud.

The ozone layer usually exists at an altitude of 10 to 50 km, but ozone also exists on the ground. Ozone is a molecule in which oxygen molecules are changed by ultraviolet rays contained in sunlight. Heavy rain is likely to occur during the strongest season of sunlight. 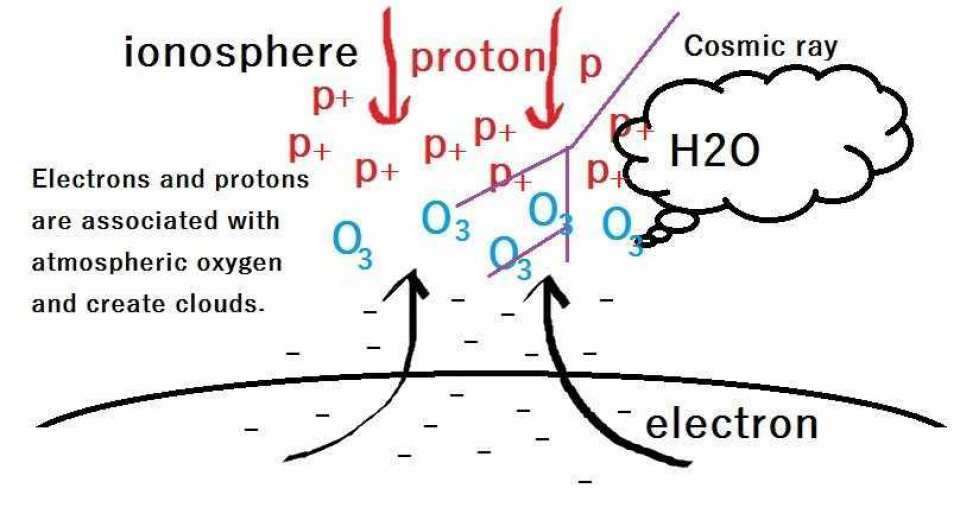 The current heavy rainfall in western Japan is considered to be due to the large amount of electrons generated from the crust. Kyushu, Chugoku, and Kansai are areas that are still expanding. Electrons from the mantle can cause earthquakes and cause heavy rainfall.

This is a video of Himawari No. 8 on July 7. We can clearly see where clouds are rising from the sea west of Okinawa. Clouds flow from Kyushu along the Japanese Archipelago, but below it is the Pacific Rim volcanic zone, and there is magma underground.

It is currently considered to be the glacial period going to the next glacial period. Even during the interglacial period, the sea level is fluctuating, so the current sea level may decline. This is because the water supply generated by the expansion of olivine decreases.

The problem is when the next Ice Age begins. There is an interglacial period of 60,000 years between the Squirrel Ice Age and the Bürm Ice Age. According to this, the interglacial season will continue for about 45,000 years. However, it is an assumption that there are unexpanded olivine in Earth. What happens if no olivine remains? Olivine supplies not only water and carbon dioxide but also electrons. Underground electrons produce rotation, magnetic field and gravity. It also has the role of maintaining the internal cavity of the earth with electrical repulsion. Depletion of olivine means collapse of the cavity. In other words, the life of Earth is over.