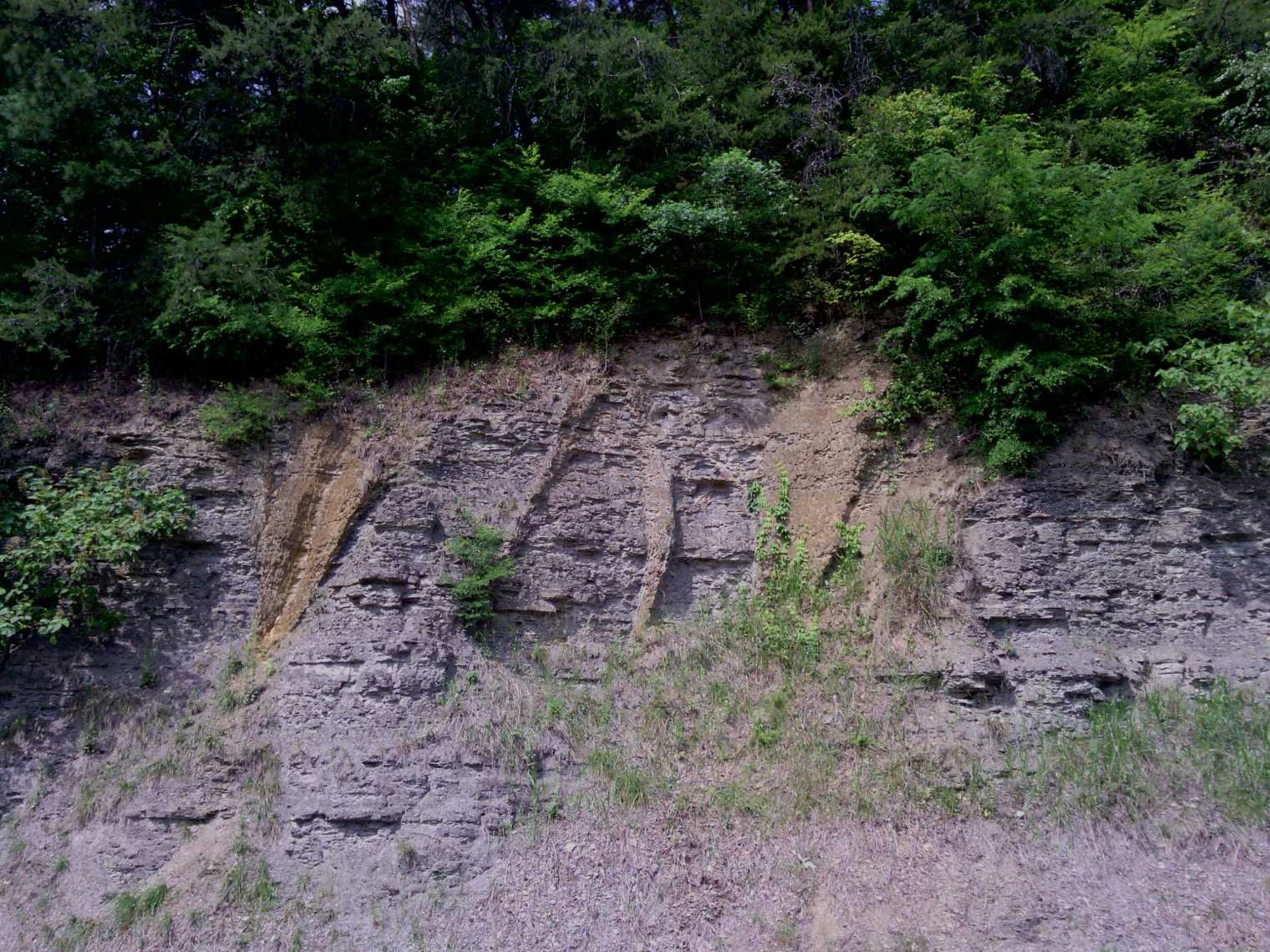 Stone Tornadoes (lithified vortices) are revealed in this ridge road-cut that skirts a rural highway near Sipsey, Alabama. The ridge rises some 300 feet above the Mulberry Fork of the Black Warrior river to its south, and 45 feet above the highway roadbed. The features were exposed when highway engineers excavated the eastern tip of the ridge during the project to widen Alabama state Hwy 78 to a 4-lane divided highway.

Sipsey Alabama - population 436 - is a tiny back water coal mining town in rural Alabama. To its west flows Blackwater Creek, a small tributary that presses close to Alabama Hwy 5 before it flows on south to the Mulberry Fork of the Black Warrior River basin.

In 2013 some startling geologic features were discovered by Electric Universe enthusiasts in a road-cut that slices almost 90 degrees vertical through a ridge that meanders above the nearby river. The ridge features were sliced almost perfectly in half by state highway engineers when AL state Hwy 5 was widened some 40 years ago.

These features look like vortices - tornadoes made of stone - embedded in the surrounding strata of the ridge. What? A stone tornado? Indeed, and a handful of them at that, in this single road-cut. 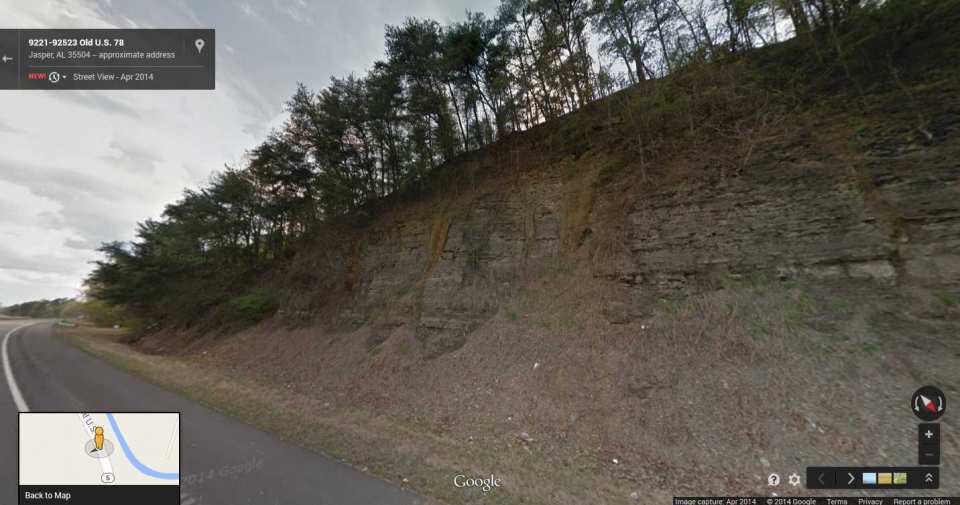 The vortex features have been studied closely, in situ, by amateur EUGeology buffs Mark Spann and Brian Cairns.  They have a three dimensional cylindrical profile, and the hollow center is revealed in some.

In 2015 Brian took samples from various points both within and outside the vortices. Rock from the inner section consists of a lighter reddish-colored stone, which stands in stark vertical relief to the surrounding horizontal strata, deep gray in color, in which it is embedded. The horizontal ridge strata consists of a form of gray shale that is common to the hydrocarbon (coal, oil, and natural gas) and iron producing regions of central and north-central Alabama. 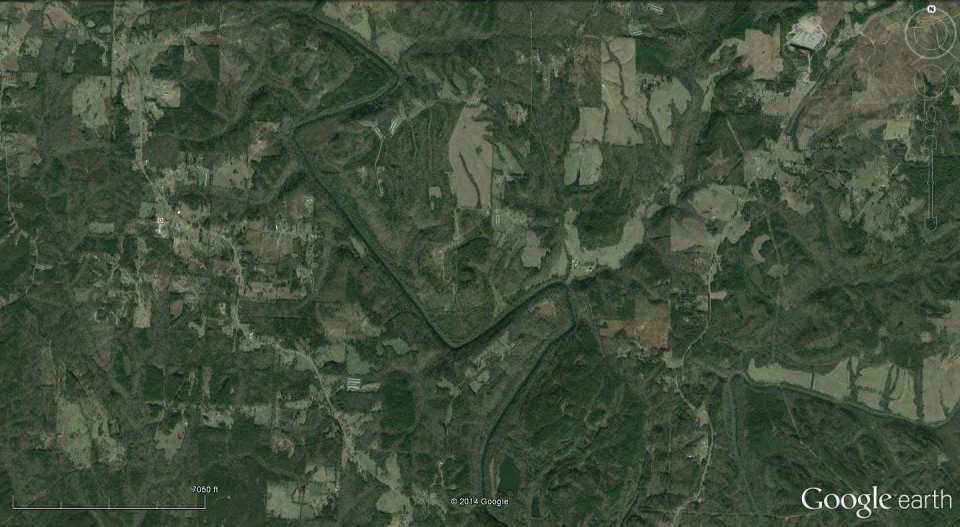 In 2015 Brian took samples from various points both within and outside the vortices. Rock from the inner section consists of a lighter reddish-colored stone, which stands in stark vertical relief to the surrounding horizontal strata, deep gray in color, in which it is embedded. The horizontal ridge strata consists of a form of gray shale that is common to the hydrocarbon (coal, oil, and natural gas) and iron producing regions of central and north-central Alabama.

Fellow Electric Universe researcher Julian West provided the amateur research effort with some excellent analysis of the surrounding terrain using Google maps. Julian noted some fascinating details, such as where the various river tributaries of the Black Warrior river take bizarre 90 degree turns, carved sharp as if by a lazer beam.

Electricity had a profound effect on the rock 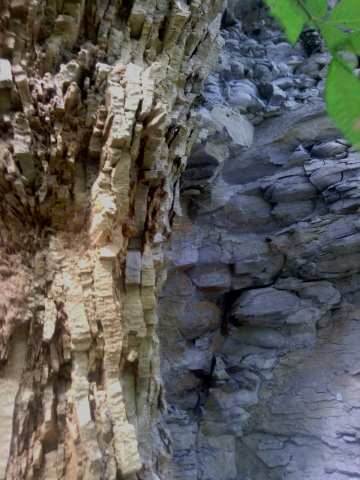 Close-up of boundary between vortice and ridge-strata

These vortice features exhibit parallel fracturing, as when rock is subjected to powerful bolts of electricity, and they stand in stark contrast to the surrounding ridge shale (right, close-up). Everyone is familiar with atmospheric lightning. However, atmospheric lightning lacks the power to cause the alteration of the rock as seen here.

An informed, speculative opinion about these formations

So when and how might the stone tornadoes have formed? Sometime before the second millennium BC the earth went through a lengthy period of cosmic electrical activity, although the latest occurrence of an intense electrically active solar system environment acting upon earth's surface could have occurred even later. The Sipsey SP vortices and ridges might date from that period when a cosmic thunderbolt struck this area of North America, and perhaps these cyclonic formations are part and parcel of the electrical geologic process that formed these ridges of shale in this mineral-rich region of central  Alabama.

During this event, at the peak of the current flow, the gray horizontal shale rock was visibly altered to a light ochre color, and the horizontal sedimentary strata was re-oriented into vertical parallel layers of fractured breccia inside the rotating vortices.The gray shale was transformed into different elements - by means of low-energy nuclear reactions. Lightning, or any arc-mode electric discharge, creates an intense magnetic field around the current flow;  metamorphosis is defined as change over long periods of time, but this alteration occurred in an instant so it will be termed stigmimorphosis from the Greek word ‘stigmi’ meaning instant. In other words, the elements were instantaneously transmuted by the intense electrical field present inside the SP vortice. For example, silicon would be transformed into iron (2 Si (28) -> 1 Fe (56)).

It is beyond the scope of this article to further discuss any conjectured catastrophic electrical event, or earth's electrical environment at the time these features were formed, but suffice it to say that, judging from the earth's top-most geographic features and strata worldwide, earth probably goes through violent paroxysms periodically.

The remainder of this article will concern itself with the results of chemical analysis of rock samples collected at the site. 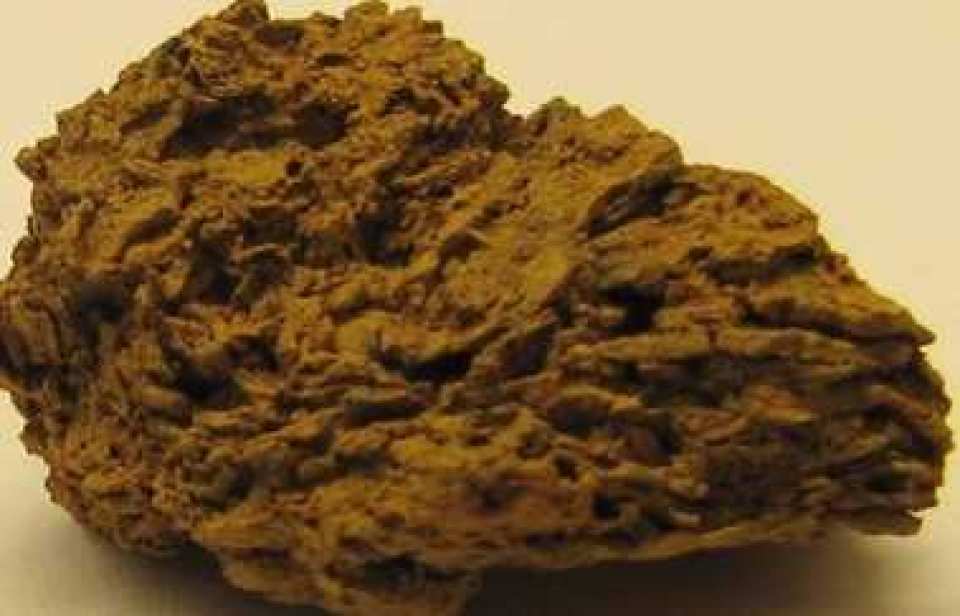 Rock sample fragment taken from inside the formation

Kelsey McNamara, curator of the museum at the New Mexico Bureau of Geology, was gracious enough to take photographs and perform X-ray diffraction analysis (XRD) on samples from the Sipsey road cut to determine their mineral content. What she found was most fascinating. Photographs were taken of rock material from the center of the largest SP vortex, where it is assumed that electric current flow was strongest.

Close inspection shows this stigmimorphic material to be a loose jumble of fragments (breccia).The rock is reduced to something more akin to packed flakes loosely welded, cemented, or otherwise tightly compacted together, indicating the fracturing of the shale continued from the macro to micro scale. Furthermore, the loose association of the stigmimorphic material suggests some of the original rock might be missing. Its chaotic nature suggests it was compressed and collapsed in on itself, yet it could not have done so without having the necessary space. Moreover, analysis of the chemical composition of the shale ridge strata outside of the vortices shows it is composed of largely of ferrian-muscovite and quartz, plus smaller amounts of clinoclore and albite. (All samples discussed here were taken from cliff face at the same elevation). One mineral, albite, was not found in two samples taken from a much lower elevation. No other minerals show up in the XRDs.

What Kelsey's XRDs found at the micro (atomic) level was far more profound. As stated, all samples were taken at the same elevation. 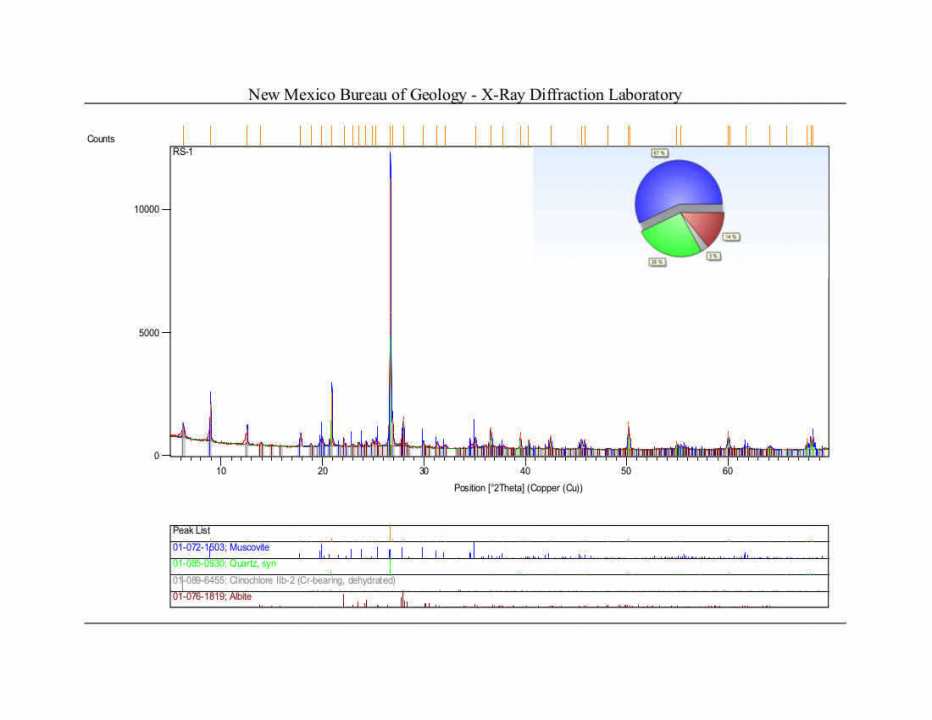 The first XRD was a sample of the cliff face about 20 inches away from the edge of the vortice. It shows muscovite, quartz, clinoclore and albite are present. Albite is a plagioclase with an atomic structure of  NaAlSi3O8.

Boundary of vortex and surrounding rock 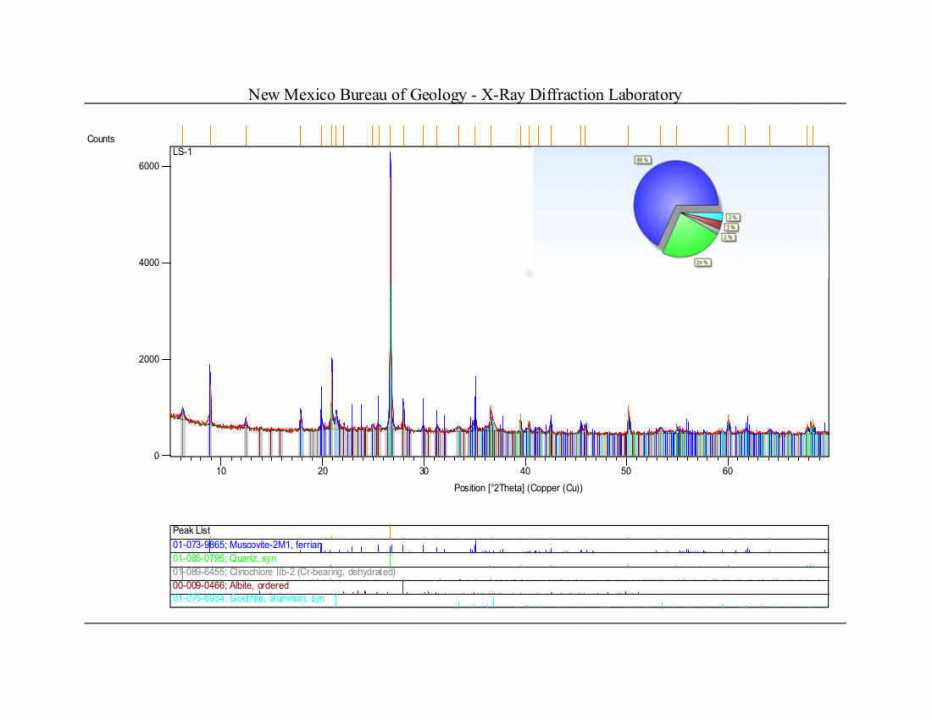 XRD Analysis taken from Boundary of Tornado and Surrounding Rock

The second XRD is from a sample taken from the outer edge of the stigmimorphic zone. Here the albite is greatly reduced, and the mineral goethite has appeared. Goethite, Fe(OH), is a form of iron ore. 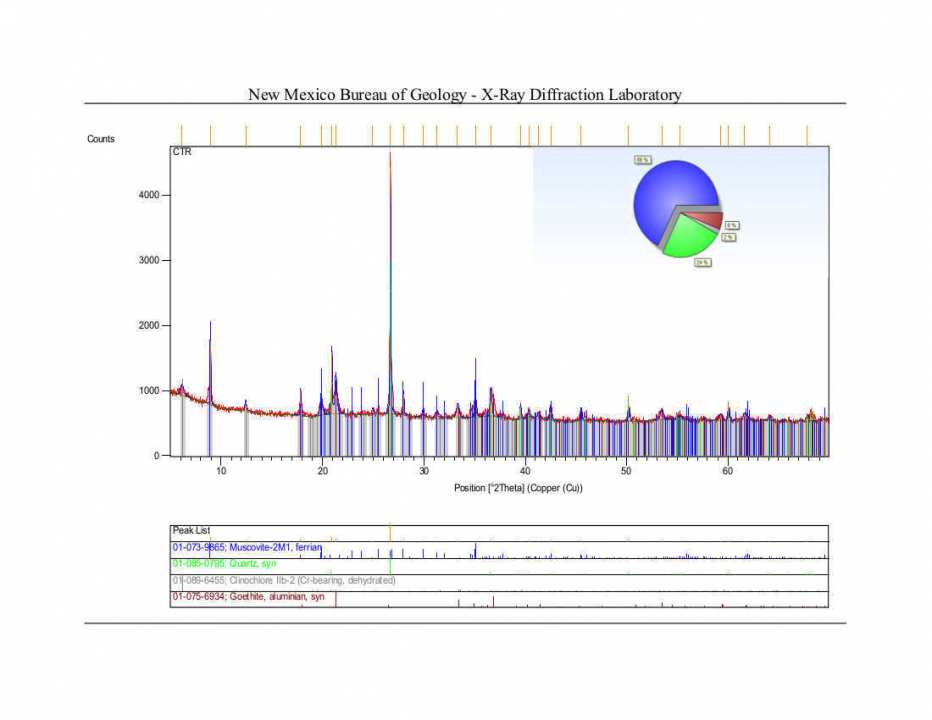 In this third XRD of samples taken from the center of the vortice, the goethite percentage increased, and the albite is completely absent. (Kelsey said the percentages on the XRDs are only approximate). The formation of goethite, and the disappearance of the albite as we move closer to the SP center appears to be directly associated with the passage of extremely intense electric current. 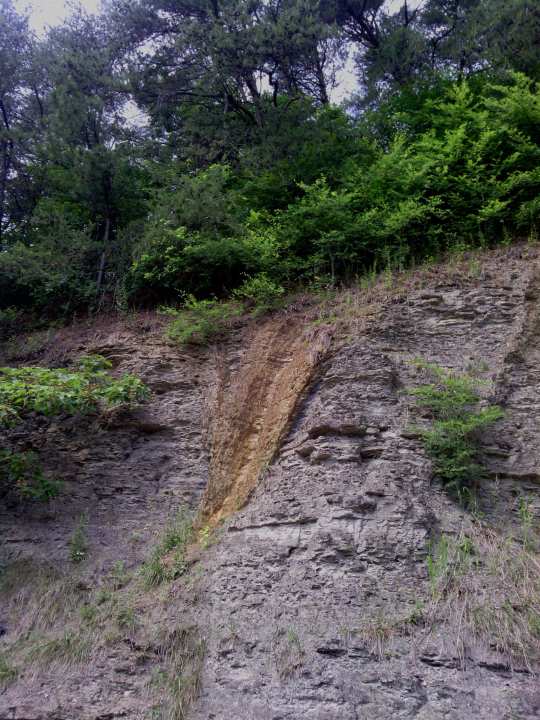 It is beyond the capacity of the writer to do more than layout the evidence of what the XRDs and the photographs are telling us. Current mainstream geologic narratives do not acknowledge the role of electricity in the production of minerals, but the XRD's analysis above says otherwise. The findings of this amateur EUGeology investigation raise serious and challenging questions for those who hold conventional views of mineral creation and formation processes. For example, how were the covalent bonds binding the elements in the albite broken? What happened to elements Na,Si, Al, O, composing albite? How was the goethite created? What was the origin of the hydrogen in the OH molecule?

Evidence from a single road-cut along Hwy 5 near the little town of Sipsey, Alabama suggests geologists, mineralogists, planetary scientist, and experts from many more fields of science may have to revisit some of the prevailing narratives and widely held beliefs about our home planet.